Whole Foods has quite the deals for its customers – in the form of coupons from their in-store guide “The Whole Deal,” as well as on their website in the electronic version of the guide. The

coupons you will find in “The Whole Deal” can be coupled with manufacturer coupons for added savings. Basically, Whole Foods is allowing customers to use the coupons they have cut out or printed off from various websites or advertisements, along with the coupons that come from the store itself. 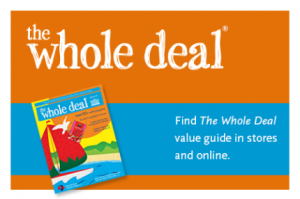 An example would be if you went to the grocery store to purchase some Larabar Uber Bars. Say you have a coupon from one of your favorite couponing sites (wink, wink) that gives you $0.75 off of any two Larabar Uber Bars. You then get into the store and find that “The Whole Deal” is offering $1 off of three Larabar Uber Bars. Using these coupons in combination with one another, you can get six of these healthy candy bars for a total of $3.49 or $0.58 each. Think about it: when was the last time you were able to buy a candy bar for $0.58? More importantly, when was the last time you were able to buy a healthy candy bar for $0.58? It’s no joke that health food is typically much more expensive than “regular” food. To offset the cost of eating food that is more beneficial to your body, Whole Foods has put “The Whole Deal” into circulation, ensuring you get the best deals from them while getting deals from others as well. Really sounds like the whole deal, doesn’t it?

Stay connected with us!